A little over six years ago, a deceptive counterfeit British India 1888 Calcutta Gold Mohur appeared. This spurious piece is made from gold, weighs within the normal tolerance, and its colour is only slightly different from that of authentic 1888 India Mohur coins. The fake was produced using the transfer die method, which creates coining dies from an authentic piece and results in all of the correct design elements. 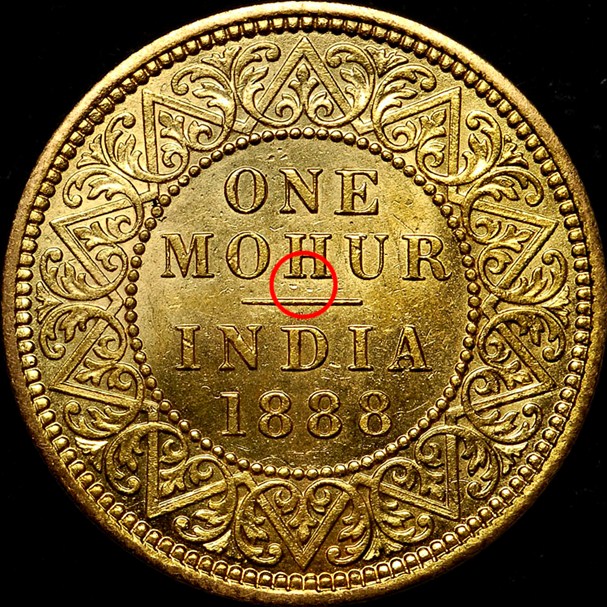 Authentic examples of India 1888 Mohur coins can bring over $3,000 on the market today and with around $450 in gold content at current prices, producing fakes can be a profitable venture for counterfeiters. Dealers and collectors should carefully study these coins or consult an expert, to avoid being duped by a counterfeit.

What is die transfer method?

These are the most common used and also the most deceptive. The counterfeiters actually create a working die this time, but since they are using the same die all imperfections struck from those dies will go onto the coins. Sometimes there will be a blemish on the die, and the counterfeiter tries to remove it. This leaves short, stubby lines on the finished coin called tool marks. Many US Indian head gold coins have tool marks in the recess of the neck.

Also since the counterfeiter is using the same die, there are things known as repeating depressions. The reason they are repeating is that any coin struck with that die will have the same imperfection. A genuine coin must be sacrificed as a host to make the transfer dies. Because the genuine coin used will have contact marks, the metal flows into the planchet creating what is known as depressions on the counterfeit coin.

These are small, often circular craters in the coin which often blend with the surrounding field, but because they were struck, they have lustre inside them. Often a contact mark is shiny and does not blend in with the fields of the coin because the metal is disrupted.

What are you looking for?